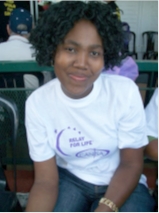 Thembi is well known for her fighting spirit as a survivor and her absolute dedication to ensure that her community is given the required information regarding cancer and CANSA. The lack of the financial support to obtain a vehicle has been hampering her – however thanks to the amazing gesture of the original winner, Mr Filipe de Gouvea, she now has the means to ensure that she performs optimally.

The Sanlam Cancer Challenge “Win A CAR for a year!” competition

In September 2014 the draw for the annual Sanlam Cancer Challenge “Win A CAR for a year!” competition sponsored by Tempest Car Hire was done and ticket 0761 bought by Mr Filipe de Gouvea from Newcastle was the lucky winner. He bought two tickets at his Sanlam Cancer Challenge 2014 Club Tournament – but it was ticket 0761 that brought him the luck.

On receiving this good news Mr de Gouvea shared his wish with the organisers and sponsors that the vehicle from the “Tempest Win A Car for a year!” competition should be donated to CANSA for the year to further enhance the CANSA education and cancer support delivery in South Africa.

The Sanlam Cancer Challenge organisers and our sponsor Tempest Car Hire  reviewed the request and it was with great excitement that CANSA was given the opportunity to nominate a CANSA staff member for whom the availability of a vehicle would best enhance the CANSA education and support program for his / her community.

The candidate within CANSA that stood out was a cancer survivor employed by CANSA as a community mobiliser in Nelspruit, Mpumalanga who has been struggling to obtain a vehicle – and we are so happy that Tempest will be handing the rental vehicle to her on Friday 16 January 2015 for use until end October 2015.

We share her story with you – and thank Sanlam Cancer Challenge, Tempest Car Hire and SynerG sincerely for making it possible for her and for CANSA to ensure that more people will be reached with the message about cancer, and will be supported in their journey with cancer in the next 10 months– leading to more lives saved.

Thembi’s cancer story starts in 2008 at the age of 26, at that stage the mother of a beautiful 8 month old boy and 10 year old girl, and foster mom to her sister’s 10 year old daughter.  At that young age she heard the devastating news that like her mother she had cancer.  Her thoughts were:  “Am I also going to die?” But working at CANSA and thanks to the incredible support of CANSA staff member Sr Rona Labuschagne she was diagnosed early and supported throughout her journey.

Thembi was diagnosed with Kaposi Sarcoma and treatment was started immediately – she returned from treatment feeling tired, nauseous and dizzy. It was difficult for her as a mother not to be able to care for her children when she felt this way, however throughout her treatment she continued her work at the Cancer Association of South Africa as Administrative Assistant / Receptionist and returned to the CANSA offices after every treatment to assist other survivors, as she could relate to the tears and fear of being a cancer survivor. She wanted to be there for other survivors, showing them how important it is to fight back!

She kept telling herself that God was in control and He would decide when her last day on earth would be.

Today nearly 7 years later she continues to fight every day.  Some days are easier than others.  Her young boy is now in grade 3 and her daughter almost finishing high school.  Thembi received international recognition from the American Cancer Society for the impact she has on other cancer survivors in 2011, this encouraged her to get involved more in the Mpumalanga rural communities to make them aware about the disease cancer.

In 2014 due to her dedication to her community and her passion to work with the community to educate them about cancer and support survivors, she was promoted to the post of Community mobilizer at CANSA serving the vast rural community in the Lowveld region. Unfortunately due to medical expenses Thembi has not been able to obtain a vehicle to enable her to function fully, but being the dedicated and committed cancer survivor she is, she made plans using public transport and finding individual sponsors to help her to get her to the communities and transport her education material to and from wellness days. A vehicle became top priority for her as her 2015 new year’s resolution, and this great gesture from Mr Filipe Gouvea made her biggest wish come true.

In December 2014 Thembi went for her annual check-up and she came back to work in January 2015 with renewed enthusiasm to continue her work when she received the wonderful news that she is still in remission.  THANK YOU Mr Filipe Gouvea – you have given her even more reason to smile with the news that she will have transport to get her to the cancer survivors in her community.  May you be blessed!

Thembi reminds us every day that “when she looks into her children’s loving eyes and when she speaks to other cancer survivors, she finds a new reason to embrace every minute she still has on this earth.”