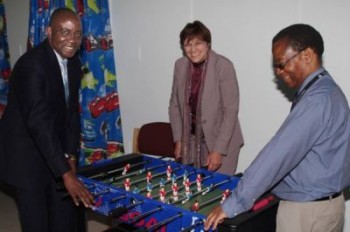 Today I left late from the office. Nothing new as one would say.

Some people even tease me in saying that since I don’t have any social life, I would be bored if I was not working. But today it was not work that kept me late. I was watching the kids play…

As I walked out of the office through the door that opens on to the garden of the new CANSA TLC Paediatric Oncology Ward, I was going toward the gate when my attention was drawn by the light in the waiting area of the out-patients section.

I stood there, taken by a feeling of joy by the spectacle that was displaying in front of me – gathered around the “soccer table”, while a group of kids were playing a soccer game – two standing on each side of the box and engaged in a very tense game. Around them, other children, boys and girls were watching and cheering.

I saw that small one, 5 years, who has completed his cycle of chemotherapy two days ago and yesterday was still lying on the bed. He was peering with Wish. Wish, 8 years, who gave me wet sweats last week, when he bled profusely and almost went into shock. Both now looked excited, full of life and happy.

Watching this scene, silently, inside myself I said thank you to CANSA TLC for this ward, and to all the sponsors who came on board like IDC, Chemserve, Rainbows and Smiles the generous people who offered the table and to the Kirsty Watts Foundation for a beautiful outside play area. 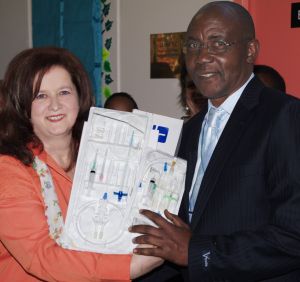 Vera van Dalen (CANSA TLC) and Dr. Wedi with donated picc lines – and to all the faceless numerous people who gave of their time, energy, money… to make ward L a beautiful reality.

Not long ago, these kids were “locked” inside crowded rooms, where they had nothing to do but watch television all day long and remain lying on their beds. I felt that, beyond the gift to us of a better working space, the new ward is a blessing for the patients themselves, because they have the opportunity to become “children” again even while going through the traumatic experience of chemotherapy.

The other day, I saw the mothers, scattered in the garden and chatting like they would do when they are home and I found it normal, but watching these kids, despite their illness and their pain, regaining their childhood, made me give praise to all the Good, for the commitment from CANSA to give to these children a home away from home.

We still have challenges in our new setting, we know everything is not perfect, but anyone can see the enthusiasm of the staff, the will to give their best for these patients.

Thank you to CANSA for offering our patients such a wonderful space, for relieving the mothers from the stress of not having a “living space” and for making our ward the talking point of the hospital.

May CANSA relay my personal appreciations to the students at the University of Pretoria who offered their time to come and paint the ward, to Mr. Jan Van As for his hard work and dedication working in this ward, to Mr. Bobby Were for the beautiful garden, to Defy and Steiner Hygiene for wonderful equipment, to Angel Walk, e-tv and Bokomo for helping with medical picc lines.

If you wish to assist with TLC projects and needs, please contact Cara Noble TLC CANSA, at email: cnoble@cansa.org.za