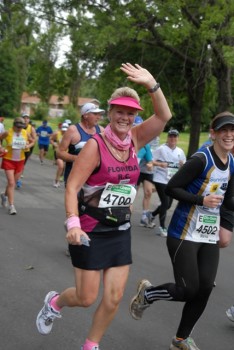 As a healthy, Comrades-running mother and business woman, cancer was the last thing Teresa ever thought would happen to her.

Her mother was diagnosed with breast cancer 13 years ago. She lost her step-mother to cancer in 2004 and her father in 2010. Cancer was an all too familiar concept to Teresa, yet she never thought she would become another victim to the disease.

Teresa committed to run the 2011 Comrades after she lost her father to colon cancer – doing the race in his honour and raising money for CANSA along the way.  She has been an avid runner and racer ever since.

After running the Two Oceans Ultramarathon on the 7th of April 2012, she knew it was time for her annual mammogram and took to it on the 13th of April. Being fit, having healthy eating habits and with no physical symptoms Teresa’s ‘out-of-the-blue’ cancer journey began when her doctor uttered the words “You have cancer”.   You will need chemotherapy, surgery and radiation. You will need to take a year out of your life.” The oncologist confirmed that it was already  stage- three breast cancer as it had spread to the lymph nodes in her armpit.

The first thought that ran through her mind was: “I’m fit and healthy, I shouldn’t get cancer, I am not a cancer candidate, how is this possible?” In one week she went from a healthy Two Oceans Ultramarathon runner to being a cancer patient.  And so her journey to recovery and health started.

Before going for her first chemotherapy treatment on 23 April, she asked the oncologist whether she could still complete the 2012 Comrades Marathon. Needless to say, Teresa is a very determined woman. She went to the Comrades as a spectator and cheered on her friends and fellow runners.

Detailing her treatment schedule to her doctors, she made it clear that she wanted to be clean and healthy by the 12th of December, in order to go on holiday with her family. She promised her seven year old son that she would be better by Christmas. Having finished her six-month chemotherapy treatment on the 1st of October, she underwent a lumpectomy on the 10th of October and started radiation on the 31st of October.

Having been a strong, independent woman – now with this new label of cancer survivor – she had never fully realised the enormity of her diagnosis. Starting her radiation treatment and meeting other cancer patients, her cancer journey became a reality for the first time. She realised the benefit of having such a strong support system, consisting of her running mates, husband and son, sisters, mother and aunt, CANSA employees, as well as finding support on Facebook.

Her biggest fear throughout her cancer journey, was of facing up to her own mortality and the realisation of how quickly one’s life can change so drastically. Handling the fears of her husband and son, trying to explain her illness to her son – and still being able to help him with his homework and other schoolwork, was very difficult.

Teresa asked her husband and son to shave all her hair off, instead of waiting for it to fall out. This was a great way for her family, especially her son, to realise the immensity of her diagnosis and her journey to recovery. She never took well to a wig, as she felt that it hid what she was going through – she is a proud cancer survivor!

Teresa developed a daily mantra to help her stay calm and in control of her cancer journey. She would repeat it every time she felt overwhelmed and scared. “Dear God, please make me calm, positive and strong.” She shared her journey on Facebook and found immense support. Her message to other cancer survivors is to share your journey, ask people to help you and don’t go through it alone.

Teresa completed her 31 radiation sessions and started her journey as a cancer survivor in remission, in time for her family holiday on the 12th of December. Now, almost a year after her diagnosis, she feels like herself again – even having entered and training for the 2013 Two Oceans and Comrades Marathons.