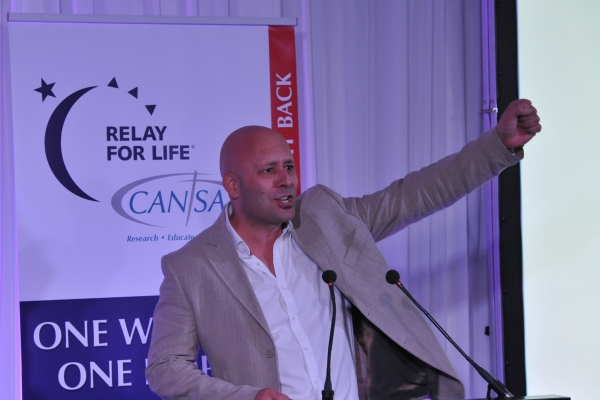 26 July 2012: Bokomo Weet-Bix and e.tv officially join the Cancer Association of South Africa (CANSA) in the fight against cancer by signing up as national partners for CANSA’s Relay For Life programme. This Corporate Social Investment (CSI) partnership spans over a three-year period involving 11 CANSA Relay For Life events in year one, launched on 26 July 2012 at a media launch at Southern Sun in Hyde Park, Johannesburg.

Relay For Life is a memorable and fun-filled overnight experience where teams of participants take turns walking a track overnight in an effort to fight cancer. At more than 70 South African Relay events nationwide, communities celebrate the lives of those who have faced cancer, remember loved ones lost and commit to fight back against the disease.

“Our partnership with Weet-Bix and e.tv helps to increase awareness and will encourage more South African communities to participate and host Relay events,” says CANSA CEO, Sue Janse van Rensburg. “The more people participate and the more Relay events are hosted, the more funds are raised for our CANSA Care Centres where the respective Relay events are hosted. This allows CANSA to be sustainable and continue to provide a life-saving service to the community.”

e.tv’s Channel Head, Monde Twala agrees when he says that e.tv recognises the importance of getting actively involved. “e.tv is proud to be associated with CANSA Relay For Life,” he says. “It’s becoming increasingly vital to join forces in the efforts to fight cancer. We’re hopeful that this year’s campaign will go a long way in creating a stronger awareness about cancer.”

Weet-Bix and CANSA have partnered for the last four years in educating South Africans on the importance of leading balanced lifestyles through making smart choices. Bokomo is extending their support of CANSA by adding the Relay message to the CANSA Smart Choice Seal and ‘Balanced Lifestyle’ information on the Bokomo Weet-Bix pack. Khosi Snondo, Brand Manager for Weet-Bix says,  “This means that over 30 million boxes bearing the CANSA message reach the homes of South Africans this year.  CANSA Relay For Life is a strong avenue for us to continue advocating the fight against cancer and we’d like to encourage South Africans to come participate and support the fight against cancer and really help make a difference.”

CANSA’s new national partners were unveiled at the media launch on the 26th of July 2012 with radio and TV celebrity and cancer survivor, Mark Pilgrim as MC – a ‘mini-Relay’ programme allowed guests to experience what happens at a real Relay event – complete with the opening ceremony, Survivors lap, teams, luminaria or candle lighting ceremony and entertainment.

The 25th of August 2012 will mark the first event launch in Durban where CANSA’s Relay For Life Weet-Bix | e.tv partnership will be officially presented and displayed for the first time. The Kwazulu-Natal Relay event is now entering its fourth year with over 30 teams taking part and is linked to the winner of the Gold Award for the Best CANSA Care Home in 2011.

The Corporate Relay For Life Event, now in its second year, takes place on the 1st of September 2012 where the focus is on corporate teams and the very necessary involvement of company teams in the fight against cancer. A total of 11 events have been nominated for the 2012 | 2013 Relay season taking place country-wide to ensure the message of ‘Celebrate, Remember, Fight Back, and One World – One Hope’, reaches everyone who has ever been touched by cancer.

“Each community’s Relay For Life is special and is part of a national and global movement in the fight against cancer.  Part of this experience involves health education activities all night about ways to reduce cancer and also to share our service that we provide to the community.” concludes Janse Van Rensburg.

About CANSA Relay For Life

Relay For Life is a fun-filled overnight experience (organised  by a volunteer committee) in which teams of participants take turns walking a track overnight in an effort to fight cancer. At more than 70 South African Relay events nationwide, communities celebrate the lives of those who have faced cancer, remember loved ones lost and commit to fight back against the disease. Relay began in USA in 1985 when Dr. Gordy Klatt, a colorectal surgeon in Tacoma, Washington, ran and walked around a track for 24 hours to raise money for the American Cancer Society. Since then, Relay has grown from a single man’s passion to fight cancer into the world’s largest global movement to end the disease. Each year, communities worldwide in 20 countries (Including South Africa), gather to take part in this global phenomenon and raise much-needed funds and awareness to save lives from cancer.

Relay For Life begins with a moving Survivors’ Lap. This inspirational lap honours the courage of all who live with cancer. Cancer survivors (anyone who has ever been diagnosed with cancer) join together to take the opening lap – unified in victory and in hope.  The atmosphere of Relay For Life is one of camaraderie and celebration, providing an opportunity for cancer survivors and caregivers to pass the torch of hope on to those still battling cancer or those that might be touched by cancer in future.