History of the CANSA Science and Resource Centre 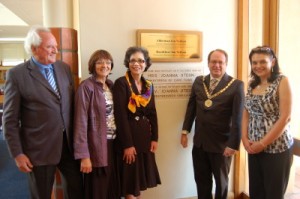 The service provided by the Resource Centre paid homage to the vision of a passionate cancer sufferer who died in 1990. Doug Eyre, a talented and highly successful electronics engineer, aviator and businessman, who retired at the age of 39, having been diagnosed with colon cancer five years earlier.  Initial surgery proved successful and Doug was restored to health with the cancer seemingly at bay. The discovery of a new, inoperable tumour in July 1987 did not deter Doug from using the limited time left to him in a positive way. He embarked on plans to initiate the “Flight for Hope” project that was launched in October of the same year. Although Doug Eyre did not live to see the completion of the Resource Centre, his indomitable spirit and determination live on in the service and successes of the Resource Centre Team and their mission to uphold Doug’s vision.

Mrs Joanna Stern, the Mayoress of Cape Town, made funds available from the Mayoress’ Christmas & Charity Fund for the landscaping of the courtyard.

The Cancer Care and Information Centre experienced significant milestones in its development. The first was the moving of the Cape Peninsula Area Office (Patient Care) onto the top floor of the Centre, thereby formally rendering the “care” component of the Centre’s function. This was an important milestone, as the Cape Western Region could now provide a fully integrated patient care programme from the Centre itself. This move had the immediate benefit of filling the Centre with staff, patients, volunteers attending training courses, the Reach for Recovery Support Group, etc and has proven to be an outstanding success.

The second significant occurrence was the agreement to formalize the responsibility for part of the financial burden of the Information (or Resource) component of the Centre, by CANSA’s Head Office. After invaluable lobbying and support from the President and Vice President, Professors Geldenhuys and Bloch, the Executive Director and Regional Chairmen, it was decided to support 33% of the annual budget. The implications of this were very exciting  and saw the Resource Centre (Information Service) function in a more active national capacity in the year 1994, developing, in particular, the support of cancer research. The most important sector served by the Information component remained Patient Care.

In the field of cancer education, the Centre ran the Cancer Update Programme on a monthly basis through a series of evening lectures by medical specialists. The Centre participated, through the Toll Free Call Centre, in national programmes run on TV and radio. Talks on cancer prevention, detection and research trends were given to community service organisations, Toktokkie groups, visitors, volunteer groups and trainee oncology nurses.

Students of the UCT School of Librarianship were hosted for their field work programme.

A counselling service was provided by Mrs Thea Marais which was an important component of the Centre’s work and an excellent complementary professional service to the Toll-Free Call Centre as well. Ms Marais also fulfilled a very important function as the dispensing doctor for Kytril, the anti-emetic drug that was made available to cancer patients.

Use of Centre’s Facilities by the Public

The profile of the Centre was much enhanced through the frequent use of the seminar and Robbie Stern Group Therapy rooms. This ensured the Centre’s developing use as a training facility, not only by CANSA for volunteer training, terminal care workshops, staff orientation and staff development, but also by outside organisations who could contribute to the Centre’s running costs.

April 2005 saw the re-launching of the Resource Centre as part of CANSA’s Western Cape Provincial Office. In the beginning of 2007, the Centre became part of the national structure once more and the Toll-Free Call Centre moved to Cape Town in April of the same year.

In as much as CANSA is deeply involved in patient care, CANSA is also involved in science in accordance with CANSA’s mission where the focus is on research with regards to early diagnosis, detection, prevention and care. CANSA subscribes to evidence-based medicine and this is obviously a scientific endeavour. The concept of science is logically coupled to information.

As from 1 January 2009 the Centre was thus renamed the CANSA Science and Resource Centre.The CANSA Science and Resource Centre was officially opened in Cape Town by the city’s Executive Deputy Mayor, Alderman Ian Neilson on 28 January 2010. The Centre houses the national Toll-Free Information Service, as well as all CANSA’s science-driven projects and events which are mainly focused on environmental issues such as cancer-related seminars and  media events. The Centre is open to the public for information and many students use the  facility for research and study purposes.

The Centre also provides appropriate counselling services to cancer patients living in the proximity of Cape Town and offers the public at large use of its Seminar Facilities.