Snapshots from the Heart

Thank you for your continued support of CANSA. Here are a few snapshots from the heart to show what your generosity has made possible…

Anthea Lewis is one of our CANSA TLC (Tough Living with Cancer) co-ordinators and is based at Tygerberg Hospital. Anthea’s specialist area is children who have cancer, and she holds them all close to her heart. One child who stands out, is Irene *

Eight-year-old Irene was receiving aggressive chemotherapy for bone cancer (osteosarcoma). On a particular day, with her hair falling out, and in great discomfort from other side effects, Irene took Anthea’s hand and asked to take a short walk with her. She wanted her last walk on two legs to be with ‘Aunty Anthea’. The next day her affected leg was to be amputated.

A week later she was up and walking on crutches – always smiling. Asked how she wanted to celebrate her upcoming birthday, and thanks to responses to Anthea’s Facebook request, she enjoyed a princess birthday party in the ward with her friends. Sharing a birthday with Nelson Mandela, Anthea saw in Irene the same courage, vision, and sense of Ubuntu as her hero. Ubuntu is a beautiful African philosophy – the belief in a universal bond of sharing that connects all humanity.

Three months after her birthday, tiredness revealed that her heart and lungs had been affected. She asked to be included in a prognosis consultation and then made her decision about the way forward. She wanted ‘quality of life’. Again, Anthea (together with donors and CANSA supporters) were able to fulfil Irene’s dearest wish – to go away on holiday with her parents and siblings. A weekend at Hermanus was arranged. A few days later she was back in hospital. Even though she lost in the end, Irene never stopped fighting.

Anthea describes her greatest privilege as being able to prepare Irene for death. She knew exactly what she wanted at her funeral – a white coffin with a glass top, and an escort of motorcycles. While Irene’s ambition to be a social worker didn’t materialise, the impact she made on the lives around her lives on. Perhaps someone else will take up her dream to one day to provide a house where abused women and children can find safety – and perhaps even name it after Irene.

Dennis is a 25 year cancer Survivor (this after being given two months to live). He’s also a keen ham radio enthusiast. But that’s not all. Here’s a bit more about Dennis.

During the 25 years since Dennis survived cancer, he developed glaucoma, but his eyesight was saved. In 2014 he achieved the No.1 position in the world amongst three million other radio ham amateurs worldwide. No mean achievement. During this period, Dennis’ beloved wife’s breast cancer required a double mastectomy. Sadly, despite her bravery, she lost the fight two years ago. Dennis describes the medical treatment they received to be of the highest order. But the bills!

Dennis continues to enjoy life, living in a cottage under the watchful eye of his daughter (an entrepreneur) whose endeavours give him the will to live. Living with a stoma isn’t ideal, and while Dennis is ever prepared for an unexpected emergency, he lives life to the full. In Dennis’ words: “I can’t begin to imagine how anyone would cope with a stoma if they couldn’t afford the basic essentials”.

To meet this critical, life-saving need, CANSA supplies everything stoma users need, at a very affordable price. And that’s due to CANSA supporters like you who give generously to help patients like Dennis, and many others like him.

Thobikele was a Social Work Intern at CANSA, doing her 3rd level field placement in 2017. During this month at CANSA, she was exposed to cancer related materials, and some of the most significant to her were the women’s health posters and leaflets. She also had the opportunity to attend a Reach for Recovery volunteer training programme where she learnt more about breast cancer and how to do self-examinations. This got her into the habit of checking her breasts regularly, and in late 2017, she discovered a lump in her left breast. Her doctor referred her to a surgeon for further assessment. By the grace of God, the tests showed that the lump wasn’t cancerous.

Thanks to what she learnt at CANSA, she knew the signs to look out for, and could take action immediately. Your ongoing support means that we can educate more women…

We hope to share many more snapshots from the heart with you into the future. Thank you for making these ones possible. 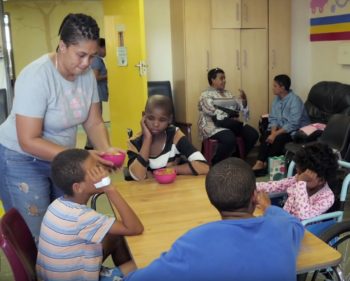 In order to process your donation you will be redirected to the GivenGain website.