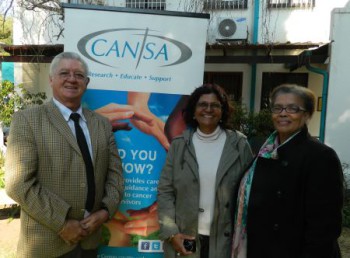 The Mozambican Association Against Cancer is an NGO that provides cancer support to individuals throughout Mozambique.

Ms Quelhas requested closer collaboration between CANSA and the Mozambican Association Against Cancer, due to cancer services in Mozambique not being well equipped and in order to receive input re improvement of support services offered to cancer Survivors, by the Association.

Breast cancer is so under-resourced that is was only in 2009 that the public health service acquired three mammogram machines, one for each regional hospital in the South, Central and Northern regions. (Three units, when the population of Mozambique is 21 million).

When women with breast problems eventually get to a doctor, it is frequently too late. The cancer is often already at a terminal stage. Those with a chance of cure must travel to the capital, Maputo, for treatment. For them this means chemotherapy or a mastectomy, but not radiotherapy as it is not available.

Patients with financial means usually travel to neighbouring South Africa for life-prolonging radiotherapy. The poor have to do without.